The branch has existed in its current form as Waterloo Nine Elms since 1967.
However, in one form or another our history stretches back considerably further to not long after ASLEF's foundation in 1880.

Prior to May 1890 Nine Elms was part of the Battersea, Nine Elms & Longhedge branch. On 15th May of that year the Nine Elms branch came into being in its own right with 21 members plus 3 transfers from Battersea & Longhedge.  The meetings were held in the Larkhall Tavern and the Branch Secretary was Bro E J Dunstan.

Following the closure of the depot at Nine Elms in 1967, the Nine Elms members were transfered to Waterloo En Block giving rise to the name that we still use today. Meetings at the time of the transfer were held in The Artichoke [now The Camel] on Lower Marsh and the Secretary was Bro P W Ginger.

Since then the branch has grown steadily, and with over 200 members now represents the overwhelming majority of Drivers at Waterloo and  Depot Drivers at Clapham Yard as well as some ex-grade Guards and Train Crew Supervisors.  We were meeting monthly at The Duke of Sussex (Baylis Road) but due to covid-19, we currently meet on-line using Zoom Video Communications. 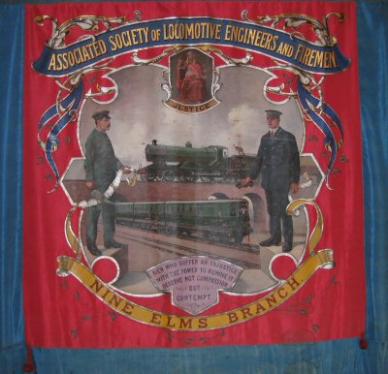 The original Nine Elms banner shown above was in use until 1967.
The banner hung in the ballroom at ASLEF national headquarters in Hampstead up until ASLEF relocated their HQ to Clerkenwell. The banner carries the slogan ;
'Men who suffer an injustice with the power to remove it deserve not compassion but contempt'
The slogan has been used on both of our subsequent banners and has also been 'borrowed' for  use on other branch banners.