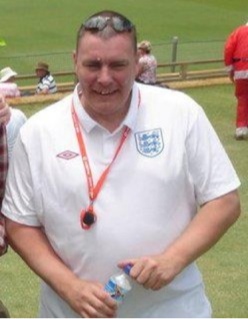 It is with deep sadness, but also with fond memories and great respect that Waterloo Nine Elms reports the loss of a trusted friend and colleague Bro David Guningham whose life was so tragically cut short suddenly and unexpectedly on the 28th July after suffering a heart attack at the age of just 46.


Having initially started on the railway as a Revenue Protection Inspector in September 2000, Dave joined the footplate grade at Waterloo in November 2001 and from his first day it was clear that he was going to be a presence both in the mess room and also in the branch room. The infamous Waterloo night link soon beckoned for Dave into which he settled very comfortably but ultimately chose to give up his place in the link in order to better serve the membership as a Rep.


Dave had come into the grade with no previous trade union experience or history but quickly came to understand Aslef's importance and value. As a branch meeting regular he grew to be a committed Aslef member holding the position within the branch of Vice Chair. He served the membership at Waterloo initially as a Health & Safety Rep, and then more recently on the LDC. Of his many qualities, it was his enthusiasm and tenacity that made him the effective Local Rep that he was. Health and Safety was where Dave excelled most. Although an often frustrating role, Dave would calmly raise issues again and again pursuing them until a satisfactory outcome was achieved for the benefit of all.


These qualities coupled with his fun loving nature made him ever present at our social events and an obvious choice as a committee member looking after the Waterloo Social & Welfare fund. Our annual outings to The Oval will not be the same without his inimitable vocal contributions.


Dave's love of cricket was not limited to county level, and with the Barmy Army he travelled to watch England play test matches in Sri Lanka and win The Ashes in Australia.

But the real sporting love of Dave's life was in his great passion for West Ham United Football Club following them home and away. This passion, not being universally shared by his friends and colleagues, frequently lead to a great deal of what can only be described as full bodied banter. At such times, and there were many, Dave always gave as good as he got and always with a smile on his face. A smile that along with his truly unmistakable laugh, will stay with anyone who ever had the good fortune and privilege to have spent any time in his company.


But of all of Dave's qualities the one for which we shall remember him best will be his sense of loyalty. Dave truly understood the meaning and value of loyalty. He demonstrated this in all aspects of his life; as a father, to his family, as a Trade Unionist, in his support for West Ham, and of course the area where we at Waterloo witnessed it most, as a friend. Dave had a caring compassionate nature; always the first to ask if you were ok, Dave would be generous in any way he could. Whatever the situation, Dave was prepared to help, support and stand by a friend. In short he could be relied upon.


Dave was a man of deep religious conviction, his faith guiding him in much of what he did. While those of us who may not share such faith will not hold any insight into where Dave may now be, two things are absolutely certain. Wherever he is Dave will still be looking after his mates and forever blowing bubbles.